I remember it very  well, the joy I felt in school during art-classes. Beside sports, art was my favourite … but somewhere during highschool something ”went wrong”.
I have no drawing- or paintingmemories at all from that period, and why all my pictures were thrown away, and pencils and crayons were hidden, I don´t know, eventhough I do have a faint idea.

Probably …. I did the same as many teenagekids with wild, wonderful dreams ; buried them not having to experience the fears of never being ”good enough”.
The ”inner judge” was, in my case, mercyless … during many years I was smoothly and elegantly avoiding everything which came anywhere near painting or drawing.  The longing was completely surpressed.

Finally it slowly surfaced, though. It was during a fantastic year in the middle of the 80-ies, which I spent in the Caribeen . I was 35, and had recently finished my examination to become a masseur and coach, dreaming about making career on the cruisingships over there.
Instead I ended up ”hanging” with some artists in Santo Domingo, and had a great time. There, sitting in a rockingchair on a big terrace, under a huge papayatree, I took up drawing again. Very quickly I noticed how good I felt from this, both in my so often aching back, AND in my restless mind.

Back in Gothenburg on the swedish westcoast, I settled down to open my health-clinic, and also started to take my paintingdream more seriously. First sketching and drawing, followed by watercolor … and finally, around 1990, my big secret dream : the oil !

I allowed the painting to slowly ”win terrain” in my everyday life. It was new, felt exciting … and it was also difficult and painful at times. Because there were moments often colored by heavy doses of selfcriticism. Both evaluating what was coming out on the paper and the canvas, and questioning why time was spent on something ”this unnessesary”.
During certain periods I was even throwing away and burning my paintings !

The curiosity won, though, many times … the fight against ”the inner judge”, and I kept on going. 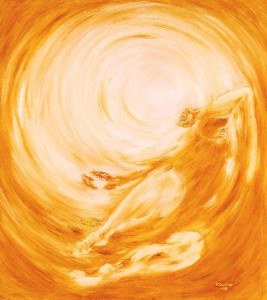 I did a lot of courses in the 90-ties, and was inspired by many things.
From nature, the wild clouds in the sky, from the mountains, and from Lappland … and later also of course from the light, the heat, and the Flamenco in Spain, where I lived for three years after the Milleniumshift.

In Spain I also met my ”paintingmentor”, swedish artist Britt Heden. She started to teach me ”los secretos de la pintura” / the sectrets of the art of painting. Beautiful and important knowledge ….. how to mix the different colors, and how they interact with one another …… and many other things connected to the world of art..

For a couple of summers I also studied art and philosophy for swedish artist Curt Källman in his school at the southern part of Öland in Sweden.  Curt had linked Eastern way of thinking to traditional artschools way of thinking, and created his own concept, which he called ”Vedic Art”. He guided me in how to link the art of painting to the philosophy and awareness.  This helped me to relax my mind more while painting, and I stopped giving myself such a hard time.
After the summers on Öland I managed to continue my painting mostly without to much judging or evaluating.

Since my homecoming from the magic years in Andalucia in Spain, I have been mostly attracted by the silence in the countryside for finding peace to paint, and the last 9 years my studio has been in a small town called Ulricehamn, where I also have lived during these years.

The painting has become more and more meditative, and there, in the stillness … has been born what wanted to be born. The resting in the process has become more important … and the linking to life, to the spiritual part of life.

My painting has become an obvious choice, a nessesary choice. The drivingforce seems to increase at times, and I strongly feels how this dream of mine refuses to be buried again !
It is quite fascinating, and mostly very enjoyable.

The words of Paulo Coelho in his book ”the Alchemist” goes ;
”when living your destiny, the whole universe will come in and help, so don´t worry ” !

I choose to believe this is the way it works.

Welcome to follow me on this site, and … if you would like, also on Facebook. ”Peter Buchar fine art” .
And see ”exhibitions” here on the site to update yourself about events, new paintings, etcetera. 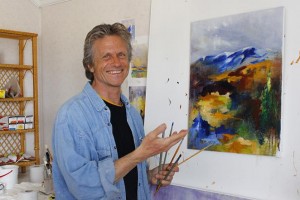